This article was originally published here. 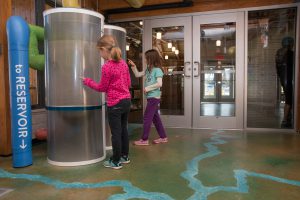 Three years after the Hitchcock Center for the Environment opened a new learning center at 845 West St., at the edge of the Hampshire College campus, the building is demonstrating the possibilities of a resilient, self-sufficient building.

With a third-party audit complete and 12 months of continuous operation showing the building is performing as designed, the Hitchcock Center’s headquarters became the 23rd building across the globe, most of which are in the United States, to earn a Certified Living Building Award from the International Living Future Institute.

Presented May 2 to Executive Director Julie Johnson at the Living Future UnConference, an international sustainability conference in Seattle, the award means that the center has earned designation through the Living Building Challenge, considered the most rigorous standard for green buildings. 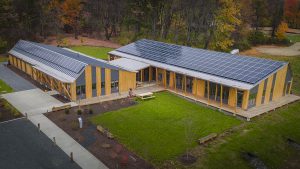 Johnson said she sees the building as a “hopeful place” and critical to confronting climate change, environmental toxins, habitat loss and species extinction.

“This is a very bold step forward to model what a greener future could look like,” Johnson said.

“We use it as an innovative teaching tool each and every day,” Johnson said, adding that one of the prime goals is to educate the next generation on how to use nature to inform a building.

Its educational mission includes informing people how to use healthy materials in a building and how to conserve water. The compostable toilets are a specific focus for K-12 education, where students are also engaged in design challenges. The visitor center at Hitchcock Center for the Environment. SUBMITTED PHOTO/Peter Vanderwarker

Johnson said the number of visitors has gone up by 325 percent since the building opened, illustrating that there is a growing interest in how a living building fit into the future.

“This is considered a pioneer building, and by working with the state regulatory environment as well as the building industry, is really changing building practices,” Johnson said.

But there have been challenges. Even with the success of the solar arrays and the composting toilets, getting a closed water system online has been difficult. While Johnson knows that the building is producing enough water on its own and can use ultraviolet sterilization to treat the water, the state’s Department of Environmental Protection won’t allow its use unless the water is chlorinated, though this would violate the nontoxic stipulations of a living building because chlorine is considered a “red line” item. Johnson said the Hitchcock Center will be installing a bigger UV array to treat the water as a way to meet state rules. Williston Northampton School’s Jane Lucia, who teaches “Going Deep in Field Ecology and Garden,”  was also recognized by the state.

The Hitchcock Center building was designed by designLAB Architects of Boston and built by Wright Builders of Northampton.

The building’s real-time performance can be viewed online in an interactive dashboard at hitchcockcenter.org.