In 2016, two “living buildings”— self-sufficient buildings that create more energy than they use and that collect their own water — were constructed in Amherst. Hampshire College’s R.W. Kern Center and the Hitchcock Center for the Environment are among the first buildings in the world to achieve the “living building” certification.

But part of what makes a building seem full of life is the people behind it — and that’s the focus of a new book by Jonathan Wright, a 1974 Hampshire College graduate and senior adviser of Northampton-based Wright Builders, the contractor who constructed the buildings.

“Living Building Makers: Creating Sustainable Buildings That Renew Our World,” published on Aug. 20, chronicles the creation of the buildings by telling the stories of the people who made them. Its 30 anecdotes offer a glimpse into the work of stonemasons, architects, sheet metal workers and construction managers — and how the ambitious projects came together.

“What I found is when you go and look at architecture books, there are case studies, there are how-to books,” Wright said Monday.

But, he added, “There’s not much about ordinary people doing extraordinary things. And that’s what this is really about — what happens when the prospect of not only doing well but doing good gets into our blood.”

Stories highlight the team’s tour of other living buildings, how it took four months to lay the 120 tons of stone sourced in Ashfield on the outside of the building and how they handled the wood waste from the project.

“The stories in ‘Living Building Makers’ will bring the process of sustainable building alive,” wrote environmental activist Bill McKibben in a blurb for the book, “to call them ‘living buildings’ is entirely appropriate, for they stem from real people with real hopes and dreams.” 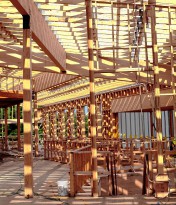 The book introduces readers to people such as Bob Kuda, a sheet metal worker, and Johanna Pratt, co-owner of Ashfield Stone Company, which supplied over a 100 tons of stone for the Kern Center from 20 miles away.

Stone, Pratt told the Gazette, “can be an international commodity, coming from all over the world. When you think what it takes to get from China to here, it’s a pretty big carbon footprint.”

Even though Hampshire College’s future remains unclear, Wright is not worried about the school or the Kern Center, he said. He pointed to the past six months of leadership changes, fundraising and reorganization as positive signs for the future. “All of that tells me the prospects for Hampshire are very good,” he said. “Both of these buildings will be part of that.”

After embarking on the projects, “I had thought maybe I would do a memoir,” he continued, poking a little fun at himself: “But who really cares how cool you thought it was, Jonathan Wright?” He played with doing a how-to book before deciding on writing about “the makers,” as he calls them.

Having spent 45 years in building and design, Wright has worked on many projects, but the two living buildings were different, he said.

“Our industry is a pilfering one,” Wright said. “It takes stuff from the earth all the time … We take steel, water, gypsum — and we don’t give anything.” That’s not true for a living building, he said.

To earn the distinction of being a living building, a structure must incorporate local and non-toxic materials, create more energy than it uses, and collect and treat its own water. The official certification requires an evaluation of how the building is functioning for one year after it’s constructed.

A building may create no emissions when in operation, “but you can have a huge carbon problem in the way it’s made,” Wright said. The certification takes into account emissions from the supply chain, too.

Finding compliant materials was difficult, Wright said. One anecdote in the book describes workers installing drywall, only to discover the company had sent the wrong product that was not compliant with living building standards.

The Kern Center was the 17th building in the world to achieve the certification and the Hitchcock Center the 23rd. Wright says the number of buildings seeking certification is growing.

Public readings for “Living Building Makers: Creating Sustainable Buildings That Renew Our World,” will be held in the Valley on Oct. 21 at 7 p.m. at the Unitarian Society of Northampton and Florence and on Oct. 30 at 7 p.m. at Amherst Books.

Greta Jochem can be reached at gjochem@gazettenet.com.