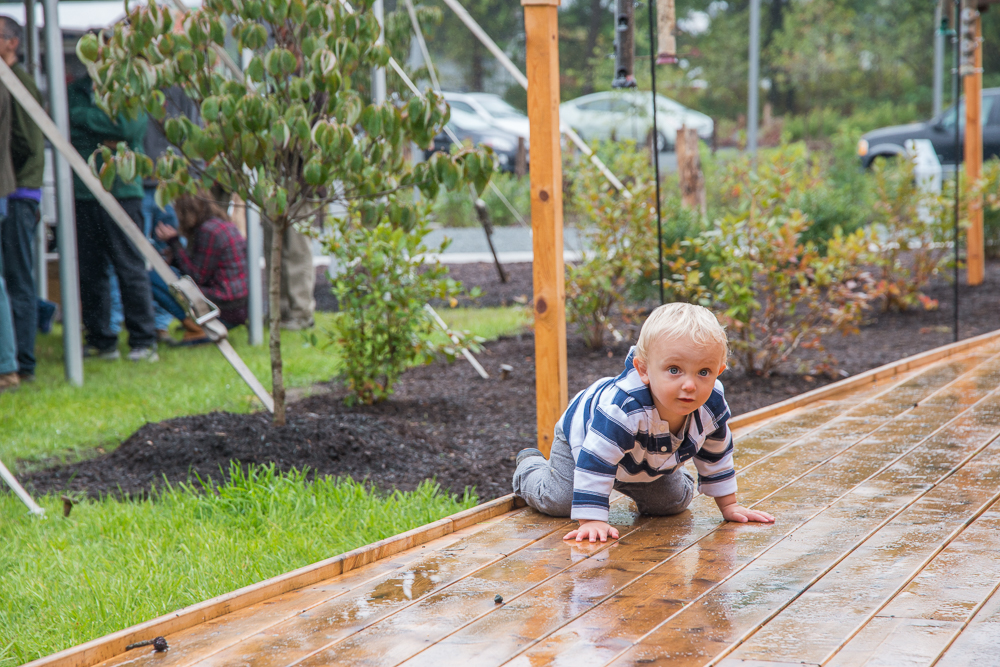 The next generation ready to explore our building!

By Maureen Turner for Going Green

This article was originally published in Going Green. A downloadable PDF of the article is available here.

Hitchcock Center serves as a powerful teaching tool for the rest of us.

Signs of the Hitchcock Center for the Environment’s commitment to sustainability are evident all around its South Amherst site: the large solar array on its roof, the rain barrels at the bottom of downspouts, the station for refilling water bottles in a hallway, the composting toilets in the restrooms. 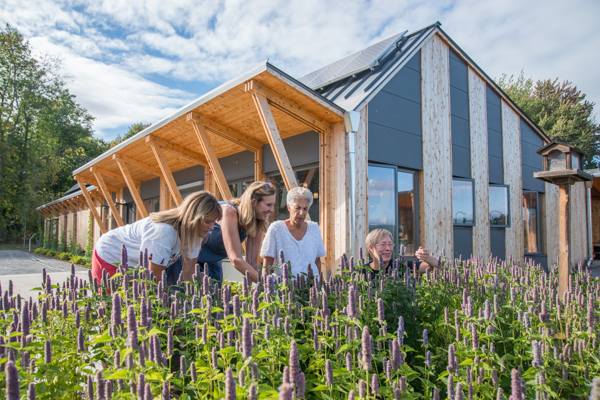 The pollinator garden at the Hitchcock Center for the Environment in Amherst. The Teaching Gardens at Hitchcock promote hands-on connections to the green and growing world for all.

But many of the green measures the center took in constructing its new home, which opened in 2016, are not immediately visible to the eye. At a recent event, “Building without Toxins: Educating for a Healthy Material World,” the nonprofit organization highlighted some of those less immediately obvious measures, the result of thoughtful, even painstaking decisions made at every step of the construction process. Those decisions were necessitated by the Hitchcock Center ’s decision to take the Living Building Challenge. The LBC, a project of the International Living Future Institute, or ILFI, calls on builders to meet a long list of exacting standards, including net zero energy and water consumption, habitat conservation on the building site, and the use of nontoxic, locally sourced building materials. (Learn more at www.livingfuture.org.)

The “Building without Toxins” event featured a panel of experts in the field, including representatives from Wright Builders, which constructed the new Hitchcock Center building as well as another LBC project at Hampshire College. Taking the Living Building Challenge “has been a truly transformative project for all of us” at Hitchcock, said Julie Johnson, the center’s executive director, who moderated the panel discussion. The project, she noted, provided an education for Hitchcock staff and an opportunity for the organization to share with others what they learned, with the building itself serving as a powerful teaching tool.

Much of the panel discussion focused on ILFI’s “Red List,” which names the most harmful materials commonly used in construction. The list includes lead, mercury, asbestos, flame retardants, polychlorinated biphenyls (PCBs), polyvinyl chloride (PVC), and other chemicals that pose risks to people and the environment. LBC projects must avoid the use of Red List materials. 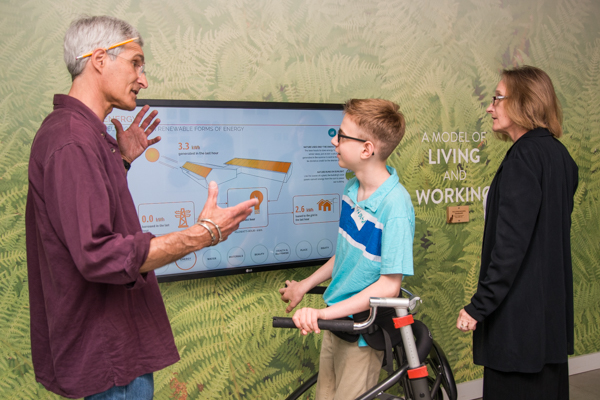 Classrooms are invited to visit the Hitchcock Center, as well as other distinct
natural areas of the Pioneer Valley through a variety of hands-on, inquirybased
field trips. The Hitchcock Center can accommodate 2 classroom field
trips at a time. A complete listing of field trip programs is available at
hitchcockcenter. org.

The LBC “flips the design process on its head,” said panelist Kath McCusker, a sustainability analyst who worked with Williams College on an LBC project. The challenge calls on participants to consider the environmental and public health implications of materials from start to finish: its extraction as a raw material; its effects on the workers who manufacture it, who install it, and who are employed in the building once it’s complete; the ability to recycle waste materials generated during processing and construction. Some materials that sound good at first raise issues on closer inspection; for instance, noted Jonathan Wright, principal at Wright Builders, while most of the steel used in construction in the U.S. is recycled, that recycling process releases large amounts of carbon and other gases into the air. The Hitchcock Center instead used for its structure responsibly forested wood, which produces oxygen, encapsulates carbon, and has a carbon footprint that’s a fraction of steel’s.

After the panel discussion, Jessica Schultz, Hitchcock’s Living Building coordinator, led a tour of the facility, pointing out some of the other green materials used in the project: formaldehyde-free adhesives, insulation made from recycled materials, VOC (volatile organic compound)-free paint, wood finishes made with whey proteinrather than toxic chemicals. In the basement, she showed off the center ’s water treatment system, which draws from a 6,000-foot reservoir on site and uses ultraviolet light rather than chlorine to kill bacteria.

In some instances, the center had to make choices that were less than ideal. For instance, Schultz noted, the carpeting on classroom floors (a must-have, given the large numbers of children who attend programs there) met the Red List requirements but is still problematic, since carpet has a relatively short lifespan compared to other materials. The builders did, however, persuade the carpet manufacturer to take back leftover scraps from the project to be recycled. They also chose a drywall company that agreed to take back leftover material.

Local building codes can also be a challenge, added Andrew Solem, an LBC materials consultant with Wright Builders. For example, code regulations require that pipes be made of plastic or copper. The Hitchcock Center opted for copper—a better option than plastic, which contains PVC (a Red List nono), but one that still poses environmental problems in its mining. 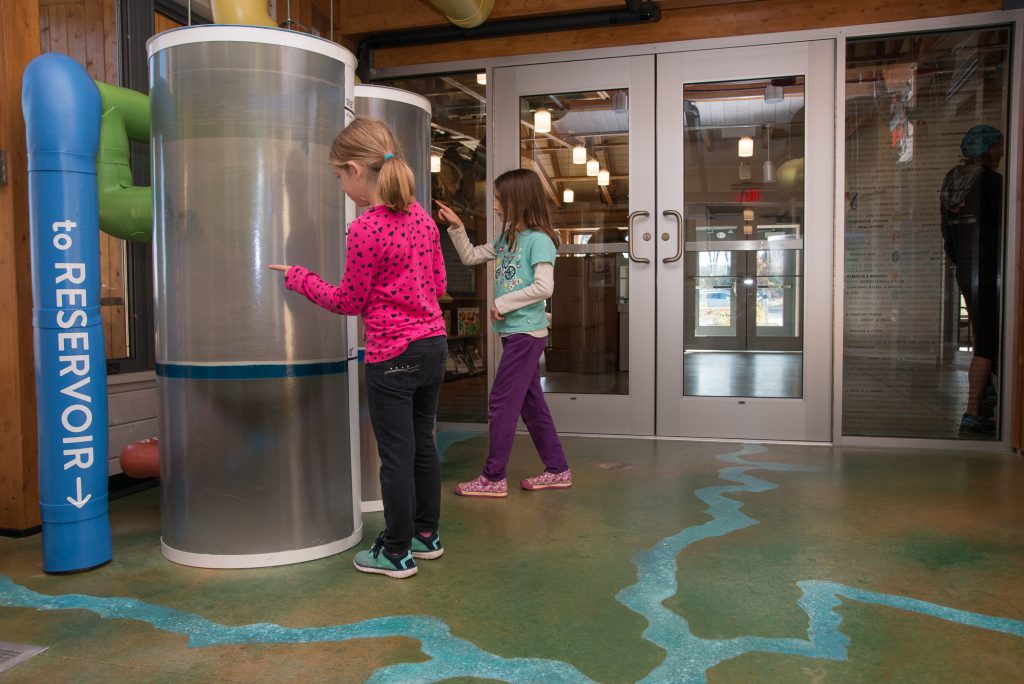 The Living Building Challenge, McCusker noted, acknowledges that sometimes it might be impossible to find a necessary material that meets its standards. In such cases, the LBC requires builders to call at least three manufacturers to find one that meets the standards; if none can be found, the builders can go with an alternative, but they must also ask the manufacturers to consider changing their processes to make a more sustainable product. The hope, she said, is that the more builders who call on manufacturers to offer greener products, the more likely manufacturers are to respond. Indeed, Wright noted, manufacturers of building materials are already accommodating calls for greener products; for example, while VOC-free paint was a niche product not long ago, now virtually every paint company offers that option in its line.

Still, there’s much to be done. Of the tens of thousands of man-made chemicals on the market, McCusker said, only a tiny fraction have been tested or are regulated. “I’m sure we don’t know more than we know,” she said. “That ’s why it’s important for consumers to demand transparency.”

It ’s also important, Solem added, for the general public to be educated about the risks posed by many of the building materials used around them, and about the healthier options that are available. To that end, the Hitchcock Center plans more public programs like the “Building without Toxins” events, including tours of its building on the first Friday of each month at 4p.m., and on the third Wednesdays of the month at noon. A full schedule of Hitchcock Center programs can be found at hitchcockcenter.org/programs.