AMHERST — As the existential problem of catastrophic climate change increasingly haunts humanity, many are looking for important ways to combat carbon emissions and reverse the trends pushing the planet to the precipice of disaster.

It was under that context that forest preservationist Michael Kellett spoke Sunday at the Hitchcock Center for the Environment about Massachusetts forests in the era of climate change. Forest loss contributes significantly to climate change, and Kellett — executive director at the nonprofit RESTORE: The North Woods — advocated protecting those forests as a way to mitigate climate calamity.

So often, Kellett said, the conversation around forest conservation and climate change focuses on deforestation in the planet’s rainforests — an important topic, but not the entire story. 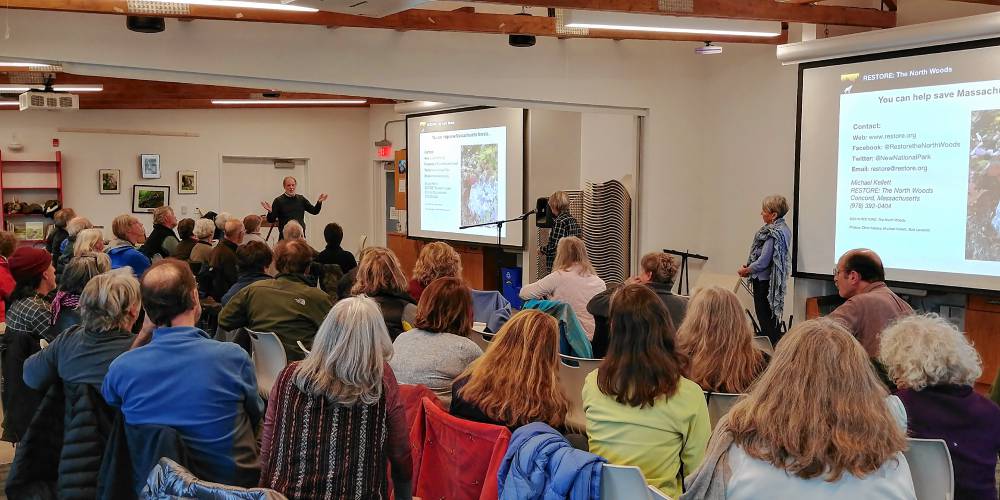 Forest preservationist Michael Kellett, left, speaks on Sunday, April 15, 2018 at the Hitchcock Center for the Environment about Massachusetts forests in the era of climate change. Kellett is the executive director at the nonprofit RESTORE: The North Woods, and advocated protecting forests as a way to mitigate climate calamity. —DUSTY CHRISTENSEN

In Massachusetts, the issue of temperate forests and climate change is an essential one. More than 60 percent of the state is covered in forest, making it the eighth-most forested state in the entire country.

Forests act as massive stores of carbon, but when they’re cut down, almost all of that carbon is released into the environment.

“We do have a fair amount of public land,” Kellett said of Massachusetts. “The problem is, the state is going in the wrong direction as far as protecting these forests for climate change or anything else.”

In particular, Kellett criticized the state’s promotion of biomass energy — in other words, the burning of wood chips or pellets made from trees and cleared brush — which he said was a giveaway to the logging industry.

As part of its “Alternative Energy Portfolio Standard,” or APS, the state subsidizes “woody biomass.” There is also a bill making its way through the Legislature that would establish a “Mohawk Trail Woodlands Partnership Fund,” which critics like Kellett say is meant to expand biomass energy production in western Massachusetts under the guise of sustainable forestry.

Proponents of biomass use say that when combined with sustainable forestry practices, the fuel can be a renewable energy source that can compete with fossil fuels. Environmentalists, however, cite research that shows biomass can produce more greenhouse gas emissions than fossil fuels such as oil and coal, and say its increased use may lead to the clear-cutting of forests.

As for the Mohawk Trail Woodlands Partnership Fund, its boosters, such as Rep. Stephen Kulik, D-Worthington, say wood energy is not a focus of the bill and that forest conservation will be more important than economic development.

Before a receptive audience of approximately 50, Kellett spent a large part of his presentation countering what he called the myths of the “working forest” that is managed for wood products. The problem, he said, is that there is no scientific definition of “sustainable logging.”

Logging, Kellett said, does not mean that the regrowing forest will absorb even more carbon, it doesn’t improve forest health and it doesn’t provide enough incentive for most private landowners to conserve forest. And burning wood, he added, is dirtier than the dirtiest fossil fuels and hasn’t provided substantial job increases in places like Maine that have invested heavily in biomass.

“We shouldn’t be promoting that as a clean alternative for fossil fuels,” Kellett said.

Kellett also threw out the idea of creating national parks on Massachusetts land, such as in the Berkshire highlands or around the Quabbin Reservoir.

“I think it’s something to think about,” he said.

Although his presentation was a warning about the potential dangers of not protecting the region’s forestland, Kellett’s overall tone was concerned optimism.

“There’s still lots of options,” he said of the solutions to climate change and the destruction of biodiversity on the planet.

Action, however, is required immediately, he added. “The time is now.”

Sunday’s presentation was the last in a series on forests and climate sponsored by the Hitchcock Center, Mass Forest Rescue Campaign, Concerned Citizens of Franklin County and RESTORE: The North Woods.

Dusty Christensen can be reached at dchristensen@gazettenet.com.