This article was original published in the Daily Hampshire Gazette. 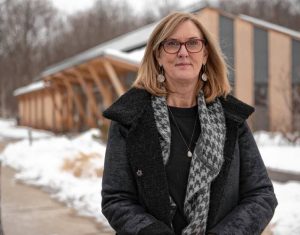 Julie Johnson, the executive director of the Hitchcock Center For The Environment in Amherst, is retiring after 20 years at the center. STAFF PHOTO/CAROL LOLLIS

AMHERST — Already well known for its environmental education when Julie Johnson arrived as executive director, the Hitchcock Center for the Environment has attained national prominence in confronting climate change and promoting environmental knowledge — and its influence continues to grow.

Johnson, set to depart at the end of June after almost two decades at the helm of the 59-year-old nonprofit, has seen the organization triple in size during her tenure while she spearheaded the construction of a new headquarters at 845 West St. that allows the center to meets its mission from a so-called living building that uses net-zero energy and creates as much water as it uses.

“I feel ready to hand over the reins to a new leader with the enthusiasm and energy I have had,” Johnson said. “There is ample opportunity to continue what we’re doing, but add elements much more focused at developing more action-based programming.” 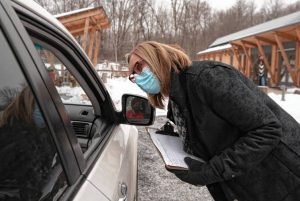 Julie Johnson, the executive director of the Hitchcock Center For The Environment in Amherst, checks parents and toddlers in for the Nature Discovery Preschool program Friday, February 5, 2021. STAFF PHOTO/CAROL LOLLIS

Though the COVID-19 pandemic delayed her decision to leave what she calls the best place she’s ever worked, Johnson said the Hitchcock Center’s biggest asset is the staff and environmental educators who teach 10,500 program participants each year from the building and site that opened in 2016 at the edge of the Hampshire College campus.

As the $7 million “Building for the Future” capital campaign closes in on its final $100,000 that made the new building possible, the center has gone from a regional entity to one with national recognition. 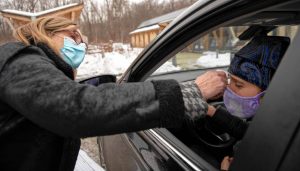 Julie Johnson, the executive director of the Hitchcock Center For The Environment in Amherst, checks Isa Deloge and her daughter Autumn Deloge in for the Nature Discovery Preschool program Friday, February 5, 2021. STAFF PHOTO/CAROL LOLLIS

The Hitchcock Center began in 1962 in a century-old carriage house and two classrooms at the Larch Hill site off South Pleasant Street, and when it couldn’t expand on the town-owned property, Johnson embarked on a quest to find a new location. She said the organization was extremely fortunate to find a partner with Hampshire College, which offered a generous 95-year ground lease.

“It took a lot of courage and vision to do that,” she said.

At the time of participating in the living building challenge, only three other buildings in the country were similarly certified. 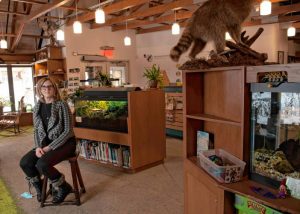 Julie Johnson, the executive director of the Hitchcock Center For The Environment in Amherst, is retiring after 20 years at the center. STAFF PHOTO/CAROL LOLLIS

“We need to ensure that we can maintain our capital asset,” Johnson said.

With that, she brought the center’s net assets to well over $6 million, ensuring that the organization remains cash-positive, healthy and resilient as it approaches its 60th anniversary.

“The Hitchcock Center is in a remarkable place, financially strong and programmatically strong,” Johnson said.

Nancy Eddy, who chaired the capital campaign, said Johnson brought the Hitchcock Center to a stage where it is a nationally recognized educational powerhouse, and was also a pleasure to work with.

“She was focused and organized, and truly committed to educating people about environmental issues,” Eddy said, adding that Johnson has seen a silver lining in the pandemic, encouraging people to get outdoors and enjoy nature.

Clay Ballantine, president of the Hitchcock Center’s board of directors, said in a statement that Johnson brought “dedication, passion, enthusiasm and motivation.” 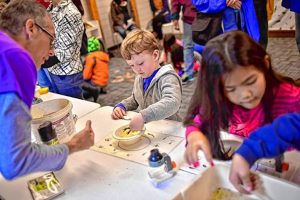 Jeff Mazur, left, with the Hitchcock Center shows Konrad Henry, 3, how to pick up a crayfish during the Grand Opening of the new Hitchcock Center Saturday, Oct. 1, 2016 at 845 West Street in Amherst. STAFF FILE PHOTO

“We are also very excited about the next chapter of the Hitchcock Center as we endeavor to meet the growing demand for environmental literacy,” Ballantine said.

When she departs, Johnson expects to do independent consulting, using her skills, knowledge and experience to guide other nonprofits that need professional development.

Despite the challenges brought on by the pandemic — such as not offering the summer camp last year, and having to create new virtual programs around water management for fifth-grade classes in the Agawam and Chicopee public schools — COVID-19 has also meant starting new in-person programs, three to five a day, exclusively outdoors for children. In the fall, the center tripled the number of programs for families with children ages 6 to 9, covering a range of topics, such as Nature Play and Girls in the Wild.

More than 200 families, Johnson said, have done nature walks in which participants are fully masked and stay 6 feet apart from other family pods. On Friday, even as light snow fell, parents and their little ones came to the Nature Discovery program, staying for 90 minutes to two hours — after COVID-19 screenings that included temperature checks — to gather sticks and listen to stick stories. 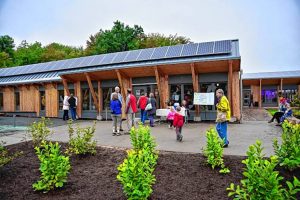 People walk around during the Grand Opening of the new Hitchcock Center Saturday, Oct. 1, 2016 at 845 West Street in Amherst. STAFF FILE PHOTO

With vaccinations underway, Johnson said there could be more flexibility in what the Hitchcock Center can offer in the spring, including field trips.

“I feel there is an end in sight now and hope the extreme COVID infection rate continues to go down,” Johnson said.

Tom Davies, vice president of the Hitchcock Center’s board of directors, is leading the executive search committee, working with TSNE MissionWorks consultant Cathy Cohen on a national search to find the right candidate to lead the organization.

Johnson said her successor will get a plan for growing programs, such as the expanding youth climate summit, and to fully use the potential of the living building to confront the challenges of a warming planet that has been a concern since the 1980s.

“Climate change is an existential threat, and more than 35 years later we are beginning to see the consequences,” she said. “Through programming and the building, the Hitchcock Center can step up to help the community with a path forward.”