Two $250,000 gifts to local land trusts are a fitting legacy for a longtime music cataloger at Smith College whose other passion led to her nickname, the “Trail Lady.”

Kathryn “Kay” Burnett died at Linda Manor in Leeds on May 28 at age 87. She worked at Smith for more than a half century, and when she wasn’t busy there, she cared for 22 miles of hiking trails at the Mount Tom State Reservation. The Kay Bee Trail is named for her.

Last week, Kestrel Land Trust, in Amherst, and Franklin Land Trust, in Shelburne Falls, announced that each had received $250,000 from Burnett’s estate to continue their work of land preservation and ensuring its accessibility to the public.

Bill Finn, who served on the Mount Tom State Reservation Citizens Advisory Committee with Burnett, described her as a guiding force. “She believed that trails are essential for connecting people to the land,” he said. “There is so much about Kay’s life that should be an example and inspiration to future generations, encouraging people to enjoy and care for the land.”

Burnett made wooden bridges in her garage in Northampton and took them up the mountain for use on the trails. They can be seen on the Beau Bridges Trail, which has seven bridges that cross Cascade Brook.

Kristin DeBoer, executive director of Kestrel, said it will use the bequest to continue expanding public access to the trails at Mount Tom and the Mount Holyoke Range, which have a combined 16,000 acres in Amherst, Hadley, Belchertown, Granby, South Hadley, Holyoke and Easthampton.

“Kay has already left a tangible legacy by helping other people to explore the beautiful landscape of Mount Tom,” DeBoer said. “Now, with her generous financial gift, Kestrel and our partners will be able to do even more to preserve and share the land she loved.”

Burnett, an unassuming woman, also was recognized for her skills as a music librarian. She arrived as a graduate student at Smith, where she worked in the music library. She was appointed music cataloger in 1980, and in 2002 was the first recipient of a distinguished service award “for significant professional contributions to the music library community.”

The librarian and outdoorswoman now also will be remembered for her generosity in ensuring that future generations will enjoy the natural beauty she loved so much. 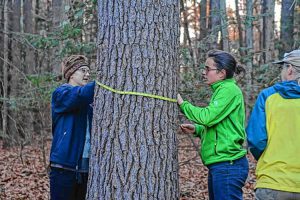 They were shown how the Hitchcock Center for the Environment’s new “living building” works on the Hampshire College campus in Amherst, and were schooled about the importance of watersheds in flood zones at Arcadia Wildlife Sanctuary in Easthampton.

The summit was organized by students at Hampshire and Smith colleges. “I got involved because I wanted to further integrate the environmental justice community at Hampshire with the work going on at the Hitchcock Center,” said lead organizer Rhys MacArthur.

Among the participants was Piper Lacy, of Shutesbury, a 17-year-old senior at Amherst Regional who is a member of its Environmental Action Club. She was impressed with the “living building” at Hitchcock, which is designed to produce as much energy as it uses and to keep all waste on-site.

“It has been really amazing to see it’s possible to build a building in this way,” she said. “This gives me a lot of hope for the future.”

It is critical for this generation of high school students to act on those lessons.

Kudos to the Sojourner Truth School for Social Change leadership for its work throughout the Valley teaching movement-building skills.

Established by the Rev. Andrea Ayvazian of Northampton in response to Donald Trump’s election as president, the school offered 42 classes during the summer and another 46 this fall, all at no charge.

Activist Jo Comerford led a two-hour workshop one Saturday afternoon this month at the Lilly Library in Florence, focusing on successful strategies and tactics used by community organizers.

The school will take a break during December, and winter classes begin in January. Information is available online at truthschool.org.