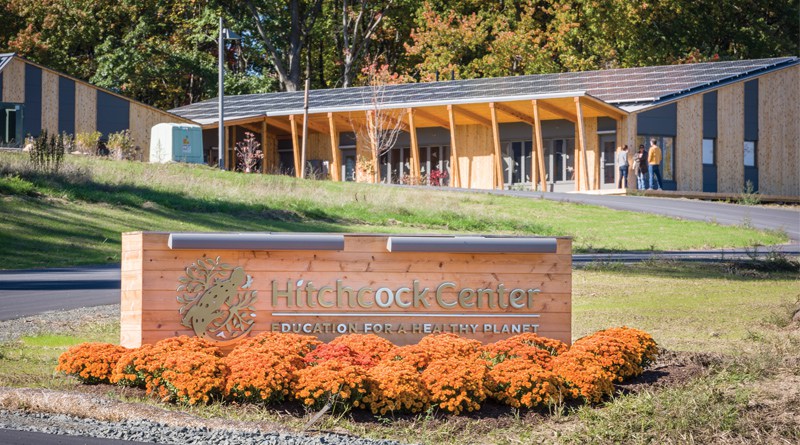 AMHERST, Mass. — The Hitchcock Center for the Environment in Amherst debuted its new 9,000-square-foot facility in fall 2016. Even though the environmental education center is built on the Hampshire College campus, the independent, nonprofit is completely separate, with a mission to develop environmental curriculums that are then implemented in schools throughout New England. Now, that mission is coming to life with its brand-new sustainable facility that doubles as an engaging learning tool for the center’s field trip, after-school and preschool programs, among others. Better yet, it’s currently seeking Living Building Challenge certification.

In its efforts to get certification, the project enhances the core mission of the institution by providing a physical environmental tool from which students can learn through artwork, exhibits and an interactive dashboard built into the building. School Construction News spoke with Sam Batchelor, partner at Boston-based designLAB Architects, the architect on the Hitchcock Center project, about designing for the Living Building Challenge and what other architects can expect from the process.

Q: Why was it so important for the facility to meet the Living Building Challenge, and why was this building standard chosen instead of others?

Batchelor: We spent a lot of time with them on that. They were not sure they wanted to pursue the Living Building Challenge, but it really aligned with their mission. The Living Building Challenge is really an advocacy program disguised as a building program. We used their project as a way to shift the paradigm in building construction, and they were willing to pay a premium to be a part of that. That cost was just as much a part of their mission and was embraced by their donors. It was something that they were able to promote and, ultimately, were able to access more funding than had they not.

Q: What are some of the key design elements incorporated into this project?

Batchelor: What was really important for the Hitchcock Center and [the design team] was the outdoor spaces. Particularly with a group like the Hitchcock Center, their primary goal is to get students out into the environment rather than put them in a classroom, so every classroom and every room in the building has direct access to the outside — even the bathrooms.

The shape of the building is essentially made up of two bars. The front bar is the visitors center and offices — or the public half of the building. Visitors come in, and that half of the space is all about observing nature. There are mounts with various taxidermies — live exhibits with a snake and a turtle and aquarium. The back half is the classrooms, so it’s about applying those observed principles to illustrate how the building is an active participant in its environment. We have a big systems exhibit that illustrates how the heating cooling ventilation systems mimic natural principles.

Those two bars are offset so they make more of a Z-shape. The two spaces that are created by that Z are the nest, which is southern facing, brighter and sits on top of a hill. The den courtyard then is north facing, shaded and is adjacent to a wetland. What we’re trying to do is show that you can have two very close spaces — only separated by a few feet — and outdoor environments with very different microclimates. It’s about understanding the different kind of wildlife and habitats that exist even with such small differences in orientation and shading and drainage.

That was driven by a very functional need to have separate spaces that would have two classrooms of kids outside so that even if they had a first-grade classroom and eighth-grade classrooms, the eighth graders wouldn’t trample the first graders. But it’s also a good example of how every space in the building is embedded with some sort of pedagogical idea about the environment, so every experiential moment has some sort of parallel to the natural world.

The whole idea of systems thinking is a big priority of theirs in that everything is part of a system and that we’re part of those systems. We’re not somehow on the outside, separate from the environment trying not to disrupt it — that we’re a part of it; we interact with it; we change it; and we can decide how our actions change it for the better or good.

Q: What are some of the key requirements for the Living Building Challenge that were considered in the design?

Batchelor: The Living Building Challenge addresses seven “petals.” I think the three most difficult [to achieve] are energy, water and materials. The energy one we’ve been able to achieve in our first year; we’re still chasing the water one; and the materials one we think we’ve basically achieved — just need to survive the audit process. The materials one is about using nontoxic materials that don’t include any of the red list materials that runs the gamut from arsenic to polyvinyl chloride (PVC).

To read the entire article, check out the January/February issue of School Construction News.