Dead leaves and plants littered the dirt and the group scrambled over a few logs and rocks making their way through the wooded area on city-owned conservation land. After a few minutes, the group, led by teacher Renee Bachman and Hitchcock Center environmental educator Ted Watt, reached a clearing where the students were on a mission: take count of how many red-backed salamanders they see. 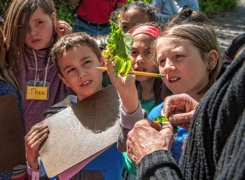 Leeds School third graders, from left, Thea Piziali, Eli Vasilevich, Laila Caniglia-Sing and Grace Carpenter examine a fallen leaf stem as Watt explains what creature likely bit through it and caused it to fall to the ground. STAFF PHOTO/KEVIN GUTTING

The students are contributing to a citizen science project. The information they collect is submitted to the Salamander Population and Adaptation Research Collaboration Network, a collaboration between Penn State University and the U.S. Geological Survey’s Amphibian Research and Monitoring Initiative.

The study aims to determine a population estimate and how it’s changing over time so researchers can better project how climate change will impact the red-backed salamanders, a ubiquitous species across much of the Eastern United States. 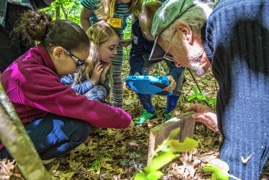 Leeds Elementary School third graders, including Ant’Gilee Ayala, left, and Mia Bourgeois, check under a cover board for salamander, or other, activity during a visit to the Beaver Brook Greenway with naturalist and environmental educator Ted Watt, right, of the Hitchcock Center for the Environment on Wednesday, May 22. Watt is helping the class study the salamander population and its habitat near the Northampton school and their collected data will be included in the USGS Northeast Amphibian and Research Monitoring Initiative. STAFF PHOTO/KEVIN GUTTING

Leeds Elementary students are just one of many groups collecting data.

“It’s great because it extends the reach of scientists — they can’t be in as many places as citizens can. It’s a real service to the science,” Watt said. “But it gives the students a real taste of what doing science is like — the excitement and the disappointment of it.”

It’s the third year the elementary school has worked on the project, supported by a grant from the Northampton Education Foundation. It’s also the third time the class has been out this year.

Watt and the third graders look under a log as they study the salamander population and its habitat in the Beaver Brook Greenway near the Northampton school. STAFF PHOTO/KEVIN GUTTING

In the forest clearing, small square wooden boards were previously placed on the ground. Several small groups of students started to overturn boards, searching for red-backed salamanders. They record information on a clipboard, like how many they see and conditions like the air temperature and wind. When they find a creature, a student documents it by taking a photo with an iPad.

As part of the life sciences curriculum, the project “hits all the scientific methods,” Bachman said, leading the group and wearing binoculars around her neck.

The students make predictions about how many salamanders they will find and hypothesize about what conditions might lead to finding more.

Bachman said her students know about the environment and how it’s changing, but she said, “This is a time when we get a chance to talk about it.”

One of her main goals is also to get kids outside and re-connect with nature. “I think we’ve become detached from it,” she said.

Watt agrees, noting that, in general, young people are now exposed less to nature than in previous generations.

“We do see that happening here at Hitchcock Center,” he said. “I do see more anxiety and more fear from students about being outdoors.” 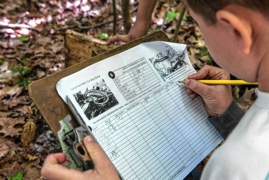 Leeds third grader Rowan Durrant-West records conditions and observations found under cover board No. 45 in the area of a known salamander habitat during a visit to the Beaver Brook Greenway near the Northampton school. STAFF PHOTO/KEVIN GUTTING

“I think it builds their confidence in being outdoors, builds their motivation,” he said of projects like the salamander one. “And builds interest in sustaining the natural environment.”

In the forest, student Ant’GileeAyala explained there are different types of salamanders, holding up photos of them. She then cut off mid-sentence and she and her classmates took off toward a nearby student shouting “salamander!” and pointing to an overturned log. 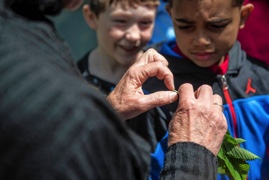 Though the project is about red-backed salamanders, Watt took opportunities to educate the students more generally about their natural surroundings. Spotting some leaves on the ground, he asked why they were there. “These leaves didn’t fall by themselves,” he said, noting that only happens in the fall. He picked up a leaf and showed two bite marks on it to the students who circled around him. Squirrels like to eat the seeds on the tree and drop the branches, he explained. 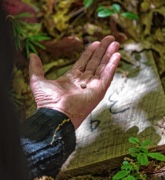 After about an hour, the group made their way out of the forested area, walking on a winding path along a brook until they reached the bike path that led back to the school.

“I thought it was fun to see the wildlife,” said third grader Grace Carpenter as she walked, “and see what would pop up under the logs.” 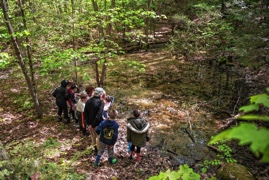 Watt and Leeds School third graders visit a small pond during a study of the salamander population. STAFF PHOTO/KEVIN GUTTING

Student Jahir Winz reported finding three salamanders and enjoying exploring the forest. “I like being outside,” he said. “I don’t usually do that. It was cool.”

Greta Jochem can be reached at gjochem@gazettenet.com.