By Scott Merzbach for the Daily Hampshire Gazette

The new site for the Hitchcock Center in Amherst. —Carol Lollis

AMHERST – Harvesting its own water and producing its own heat and electricity will be hallmarks of the new home for the Hitchcock Center for the Environment, whose building will operate on ecological design principles such as zero net energy and zero net water when it opens this fall. 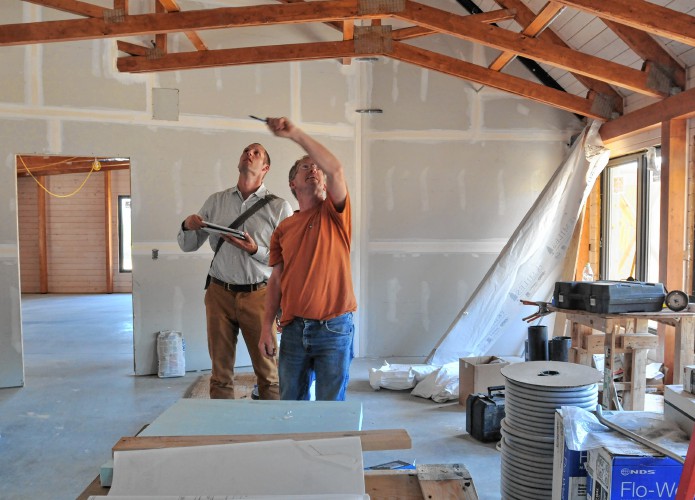 left, Sam Batchelor, with DesignLAB Architects and Todd Sessions, an electrician with Crocker Communications, talk about the wiring of the new Hitchcock Center.—Carol Lollis

Under construction since May 2015 on the Hampshire College campus, the 9,000-square-foot building took another step toward completion Tuesday with the announcement that it has received $500,000 from the state’s Executive Office of Energy and Environmental Affairs, which previously committed $830,000 to the project.

“We really see this as an innovative teaching center, not just for kids, but for teachers and adults,” said Hitchcock Executive Director Julie Johnson.

With the latest award, the $5.8 million building project is within $130,000 of meeting the goal of the capital campaign launched in 2012.

“You’re really taking this to the next level, and I really think that’s extraordinary,” said Leo Roy, commissioner of the Department of Conservation and Recreation, who was on hand to present the award.

Roy said it is important to develop a public-private partnership to create a “place-based engagement” and give people a better understanding of the natural world in which they live.

Founded in 1962, and based in a carriage house at the Larch Hill Conservation Area since 1976, the Hitchcock Center fosters awareness and understanding of the environment through its programs, many aimed at children.

Living Building Challenge
Located in an open field between the Red Barn and the Hampshire College Farm Center, the new building for the Hitchcock Center is aiming to be the first environmental learning center in the world to be certified by the Living Building Challenge. This challenge is an international program in which projects strive to be net zero energy and net zero water, and use exclusively non-toxic building materials.

The Living Building Challenge has certified just eight buildings since its launch six years ago and goes beyond the scope of the U.S. Green Building Council’s Leadership in Energy and Environmental design (LEED) program.

Johnson said the living building designation cannot be received until the center has been operating in such a manner for a full year.

Among the elements of the project are rest rooms featuring composting toilets, mechanisms for harvesting rainwater from the roof to be used as potable water in the building, and a 60-kilowatt solar array to provide power and heat. 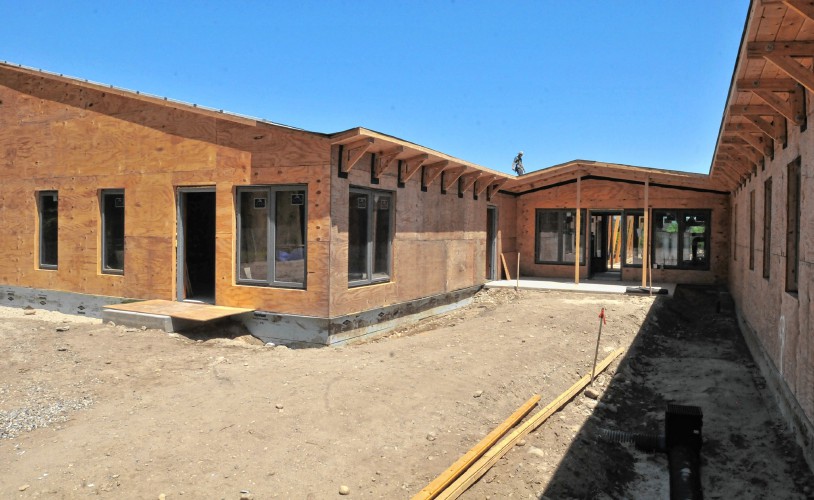 The new site for the Hitchcock Center in Amherst.—Carol Lollis

Johnson said the building amplifies the mission of the Hitchcock Center. “We feel it’s a very important way for us to build as an educator and as a leader,” Johnson said.

The new building will also triple the educational space in the center and allow for more programs. More than 8,500 participants are served each year, but the current site’s largest room can only hold 50 people. The new building will have a large room that can fit 130 people comfortably, and overlooks a courtyard and the Pelham Hills.

Wright Builders of Northampton is handling construction based on architectural plans from designLAB of Boston.

Johnson said she is confident that Wright Builders is nearing completion. “They’re working so hard to get this finished,” Johnson said.

During a tour of the building, Johnson showed off elements of the project, including tanks in which the water is collected from the roof and then sent to underground cisterns that can hold 6,000 gallons.

“What’s really exciting is how this building acts as a watershed,” Johnson said. 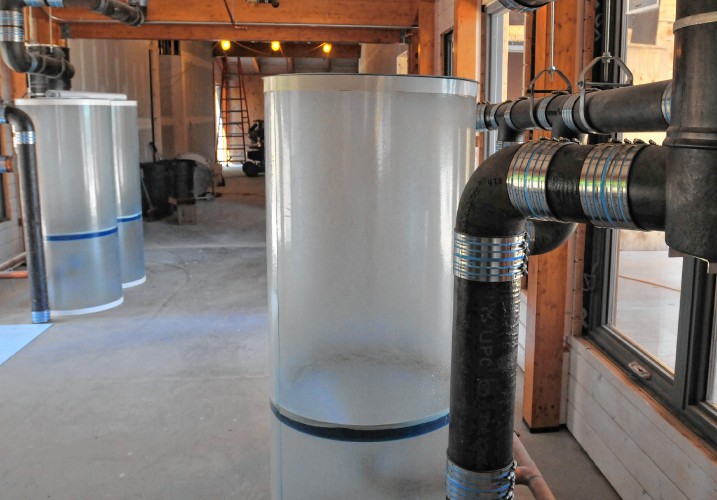 First flush tanks of the rain water capture system in the new site for the Hitchcock Center.—Carol Lollis

In fact, it will be an independent public water supply, sort of like the Quabbin Reservoir, Johnson said.

Jonathan Wright, founder of Wright Builders, said the water held at Hitchcock will be considered a small-scale reservoir.

A digital dashboard on the wall will show how much water is collected, one of several areas where children and adults can learn about how the building makes water, heat and electricity.

“We really see the building as an exhibit, so exhibits continue throughout,” Johnson said.

The gray water from the composting toilets will go to constructed wetlands near the building’s parking lot.

Wright said the Living Building Challenge requires the builder to find more completely non-toxic, and local, products, such as the wood all being from within 310 miles and natural coatings for the wood produced as a byproduct of cheese production at Cabot in Vermont.

“This process leads us to find materials that are better for us,” Wright said

Johnson said Hitchcock also had to pledge to protect an equal amount of land from development as what is displaced by the construction.

Sam Batchelor, project architect for designLAB architects, said the building mimics natural systems found in nature. Each room has access to the outdoors and promoting this connection is part of this challenge. 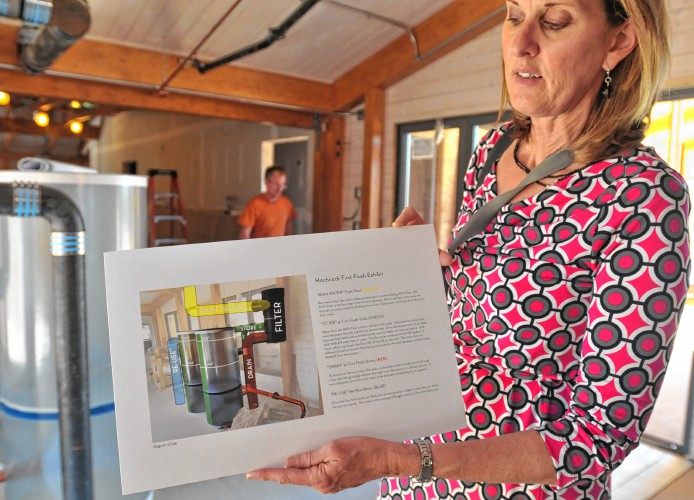 Julie Johnson, the executive director of the Hitchcock Center, with a photo of the first flush tanks of the rain water capture system. The actual tanks are behind her in the new site.—Carol Lollis

Model for state
Matthew Beaton, secretary of Energy and Environmental Affairs, said the Hitchcock Center can serve as a model for future buildings in the state. “This place is pretty awesome, I have to say,” Beaton said.

State Rep. Ellen Story, D-Amherst, secured the money for Hitchcock from the state environmental bond bill was put there by .

When she first heard about the plans, Story said she met with Nancy Eddy, chairwoman of Hitchcock’s Building for Future campaign, at the Black Sheep Deli in downtown Amherst and pledged to provide assistance.

“I said ‘How about a million dollars in the environmental bond bill?’” Story recalled. “She said ‘That sounds good.’”

Select Board member Constance Kruger said town committees helped guide the project and ensured it would be welcome along with the R.W. Kern Center, which houses admissions offices and classrooms on the Hampshire College campus and is also part of the Living Building Challenge.

Also at the event was former U.S. Congressman John Olver of Amherst, who assisted with the fundraising campaign and has advocated for use of wood in institutional buildings.

The project has also relied on a $600,000 matching grant from the state’s Cultural Facilities Fund, support from the Kendeda Fund and numerous local individuals, foundations and businesses.

With the building almost funded in its entirety, Eddy announced that the original goal will increase by $900,000 to pay for the development of handicapped-accessible nature trails and outdoor classrooms, as well as enhanced exhibit space inside the building.

Eddy said officials knew that the center would need the additional money to bring the full project cost to $6.7 million.

“The nice thing about the state coming through is we can pay for the building,” Eddy said.