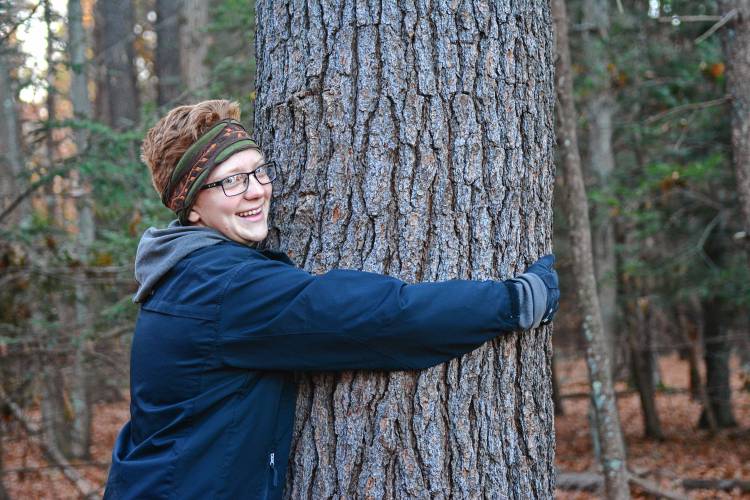 Nor Young, 15, of Amherst Regional High School, learned at the Western Mass Youth Climate Summit Friday that its possible to estimate a tree’s age by measuring its width with a hug. Here, Young hugs a tree at Arcadia Wildlife Sanctuary in Easthampton. GAZETTE STAFF/SARAH ROBERTSON

Throughout the day Friday, about 40 area high school students got to see firsthand how two local environmental organizations are confronting the challenges posed by a warming planet.

The inaugural Western Mass Youth Climate Summit took place at the Hitchcock Center for the Environment in Amherst and the Mass Audubon headquarters at the Arcadia Wildlife Sanctuary in Easthampton.

“I got involved because I wanted to further integrate the environmental justice community at Hampshire with the work going on at the Hitchcock Center,” said Rhys MacArthur, 20, a Hampshire College student and lead organizer of the event.

MacArthur, who studies environmental science and social justice, helped organize a group of 10 “Summiteers” — student volunteers from Hampshire College and Smith College to run the event.

Students had the opportunity to Skype with Hampshire College graduate Dineen O’Rourke and Smith College graduate Andrea Schmid, who are attending the U.N. Climate Conference in Bonn, Germany, and heard from other environmental leaders about actions they can take to make a difference.

“It was really interesting to hear how they remain positive throughout the conference about climate change,” said Leah Beltran, a 16-year-old Northampton High School student.

MacArthur said the speakers looked to the cancelled Keystone XL pipeline through Massachusetts as a victory for the environmental movement. O’Rourke and Schmid also shared their experience being part of the protest.

“Next year we want to try to involve 10 schools and do a two-day long summit to make a more large-scale thing,” MacArthur said. “This is sort of the pilot study.”

The Hitchcock Center’s Jessica Schultz talks to a group of high school students during a tour of the center’s “living building.” —Scott Merzbach

Nor Young, 15, of Amherst Regional High School, learned at the Western Mass Youth Climate Summit Friday that its possible to estimate a tree’s age by measuring its width with a hug. Here, Young hugs a tree at Arcadia Wildlife Sanctuary in Easthampton. GAZETTE STAFF/SARAH ROBERTSON

In the morning, Hitchcock staff members Jessica Schultz and Colleen Kelley offered insights into Hitchcock’s “living building,” which is designed to not only produce as much energy as it uses, but also to not have any waste go off-site.

Schultz took the students to the basement, where two large composters store waste from the toilets. This compost has beneficial bacteria and worms added, and will be stored for about eight years before being used as natural fertilizer for the grounds.

She also showed the students how ultraviolet light, rather than chemicals, will be used to treat the water that is all produced on-site, including the quantities collected from the roof.

In one room, Schultz explained that part of building a sustainable building was using reclaimed items, including insulation from another building that otherwise would have ended up in a landfill.

Amherst Regional students said they were impressed with the Hitchcock’s building.

“So far, it has been really amazing to see it’s possible to build a building in this way,” said Piper Lacy, a senior from Shutesbury. “This gives me a lot of hope for the future.”

Lacy, 17, noted that her parents both work professionally as environmentalists and she is a member of the school’s Environmental Action Club, which is seeking ways to educate fellow students and the larger community on ways to reduce their carbon footprint

“It gives us hope, as Piper said, and it’s cool to see you can build this type of building,” said Catherine Larson, an 18-year-old senior from Amherst.

Larson, who is also part of the environmental club, described the building as an inspiration.

“It’s very inspirational to see the methods implemented in this way,” Larson said.

Sophia Cable, a 15-year-old sophomore from Amherst, said she was amazed at the technology and some of the facts, such as 127 flushes of the compostable toilets using as much water as one flush of a conventional toilet, and the amount of water that the roof can produce.

“It’s great to see how far ahead they are. It’s one of the only buildings that so’s sustainable,” Cable said.

The students also heard from state Rep. Solomon Goldstein-Rose, who was part of the Environmental Action Club when he was at Amherst Regional less than a decade ago, and Ezra Markowitz, an environmental science professor at the University of Massachusetts Amherst.

Goldstein-Rose talked to the students about civic engagement and getting involved in fighting climate change and promoting clean energy technology. While in high school, he successfully pushed for a bill that prevents school buses from idling and continuing to release greenhouse gas emissions as they wait for students to board. He said he has confidence in what the high schoolers can do today too.

“Hopefully they will gain skills they can use in their work,” Goldstein-Rose said.

Take a hike at Arcadia

At the Arcadia Wildlife Sanctuary, Connie Parks walked a group of high schoolers along the Mill River to learn about tree health and the important of watersheds in flood zones.

“I think we can all do better than we are doing,” said Parks. “Flooding is a major concern. The Connecticut River is one of the most flood controlled rivers in the world, and yet, we can see from the flood markers on this post that we’ve had some catastrophic floods here.”

Painted signs nailed to a tree showed severe flooding in 1936 at least 10 feet above the 1984 marker for the worst flood in recent memory. Parks explained how wetlands serve as a natural buffer against floods, and when developed, homes are at serious risk.

Students also learned how to estimate the age of a tree using its height and width. If you can hug a tree, Parks told the students, it means it is about 50 years old. Afterwards, Parks taught the students the basics of solar energy while they stood next to a large solar array outside Mass Audubon’s headquarters.

Prior to the hike, students took part in a Climate Cafe session meant to facilitate discussion about the social consequences of climate change, and how students plan to address it moving forward. Groups discussed everything from global environmental problems to the small ways they are helping fight climate change.

On the walk, Parks talked about the ways immigration and climate change are related.

“Do we have an organized way to deal with people displaced by climate change?” she said. “What happens when it floods, and people have no where to go?”

Parks works as a part-time volunteer for the Arcadia Wildlife Sanctuary and the Smith Botanic Gardens while she edits an organic chemistry textbook. She says her positions give her the opportunity for ample community outreach and education-minded activism.

“You’re more likely to remember things if you’re having fun. And that’s why I find this informal education thing very valuable The message gets across because people remember it. There’s not the same pressure as the classroom.”

The Hitchcock Center is giving students the tools they need to think creatively and implement climate action plans in their schools. We ask for your help in scaling up the Summit as well as other innovative programs that will create a new generation of environmental problem-solvers.