Talking ticks at the Hitchcock Center

This article originally published in the Daily Hampshire Gazette. 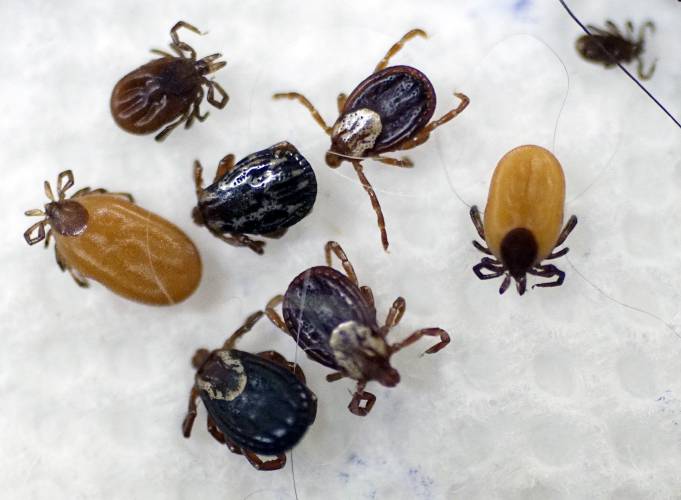 In this May 15, 2017 file photo, ticks are displayed that were collected by South Street Veterinary Services in Pittsfield, Mass. Tick numbers are on the rise across New England this spring, raising the prospect of an increase in Lyme and other diseases. Ben Garver/The Berkshire Eagle via AP

AMHERST — To combat the growing rate of Lyme disease in the Northeast, the Hitchcock Center for the Environment will host a presentation Monday night on how to best protect oneself from tick bites.
In Hampshire County, reported cases of Lyme disease have increased 32 percent since 2013, according to the state Department of Public Health, with 216 confirmed and suspected cases last year.

The discussion, titled “From Fear to Confidence: Preventing Tick-Borne Illness,” will feature two experts talking about tick-borne illnesses and the life cycle of the insect. Dr. Stephen Rich, chief medical zoologist at the University of Massachusetts Amherst Laboratory of Medical Zoology, will present findings and trends from 12 years working for the university’s “Tick Lab,” testing and researching tick-borne illnesses.

“We want to empower people, we don’t want to scare people,” Rich said. “The idea is to ratchet down that fear.”

If bitten by a tick, Rich recommends removing it as quickly as possible and getting it tested for possible pathogens. A website run through the UMass system, tickreport.com is a useful tool to gauge personal risk and send offending ticks for testing.