The Hitchcock Center Is Doing It Right! 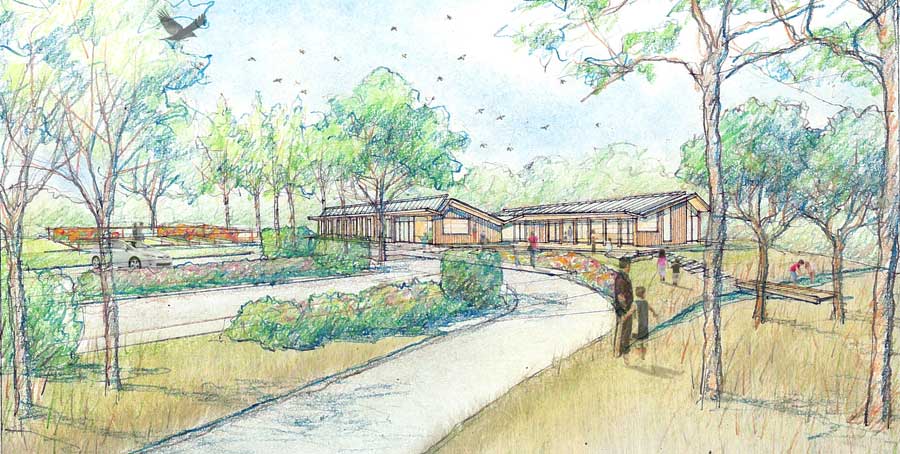 Our 8,500 square foot environmental learning Center is comprised of two wings connected by a transition corridor called the “ecotone”.

In our last issue, Green Energy Times had an article on the Hampshire College’s R. W. Kern Center, which is being built in Amherst, Massachusetts, by Wright Builders with a view to meeting the standards of the Living Building Challenge (LBC). Here, we discuss the Hitchcock Center for the Environment, which is being built to the same high standards, also by Wright Builders, and also in Amherst.

LBC standards are so high that they were thought impossible to achieve by some people when they were first published. According to the International Living Future Institute (ILFI), which administers the LBC, there have been only twenty-five structures certified under the standard, worldwide, since the LBC program began, ten years ago. Considering that, Wright Builders’ work on two structures in Amherst, both attempting to meet those standards, can be seen as remarkable.

The Hitchcock Center, however, is very remarkable for reasons of its own. In fact Eric Corey Freed, Vice President of ILFI, made it clear that it stands out as one of his favorite projects. He explained, “I love the Hitchcock Center because it stands as a testimony to what an educational center can be.” 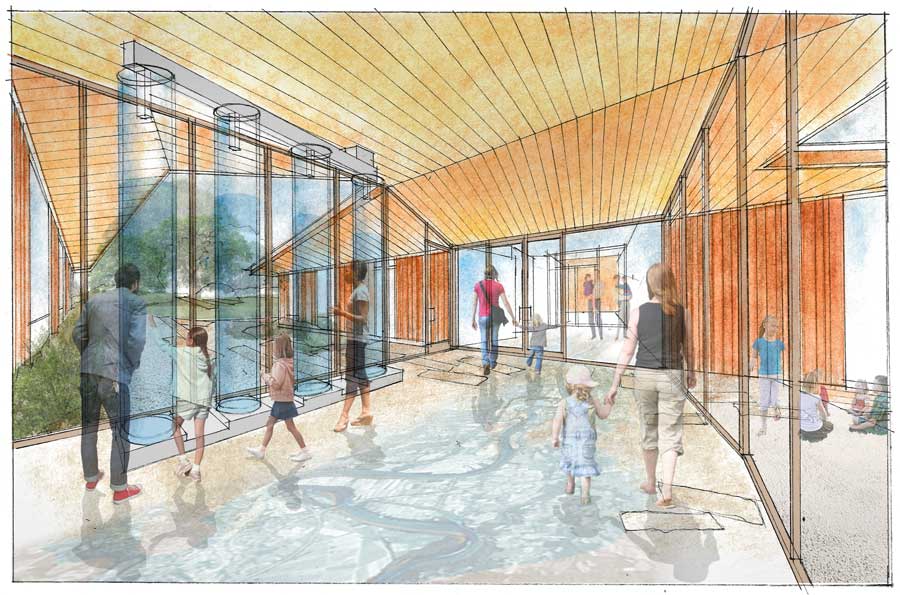 The Hitchcock Center for the Environment was founded in 1962 by Ethel Dubois, a retired guidance counselor. She was inspired by the works of Rachel Carson to foster environmental awareness among children. The center teaches five principles: understanding principles of ecology, valuing place, promoting resilience, demonstrating resilience in the built environment, and educating for active citizenship.

When the Hitchcock Center found it needed to expand to a new building, it was clear from the start that it should have net zero energy use. But the center’s leadership believed net zero energy had to be surpassed, given the center’s mission. As they worked with Wright Builders and Design Lab Architects, they became increasingly drawn toward the LBC standard for educational reasons.

Julie Johnson, the Hitchcock Center’s executive director, commented on how the center used the LBC standards to make them useful for teaching children. “It became crystal clear that given our commitment to environmental education, this was an opportunity to take a great leap to amplify our mission and use our building as a teaching tool,” she said. “Each performance standard had an incredibly cool story behind it.”

Sam Batchelor, of Design Lab Architects, also spoke of the standards that required him to design every piece of the building to make people aware of its impacts on the environment. “Our challenge throughout was to make sure that the building be about environmental literacy,” he said. 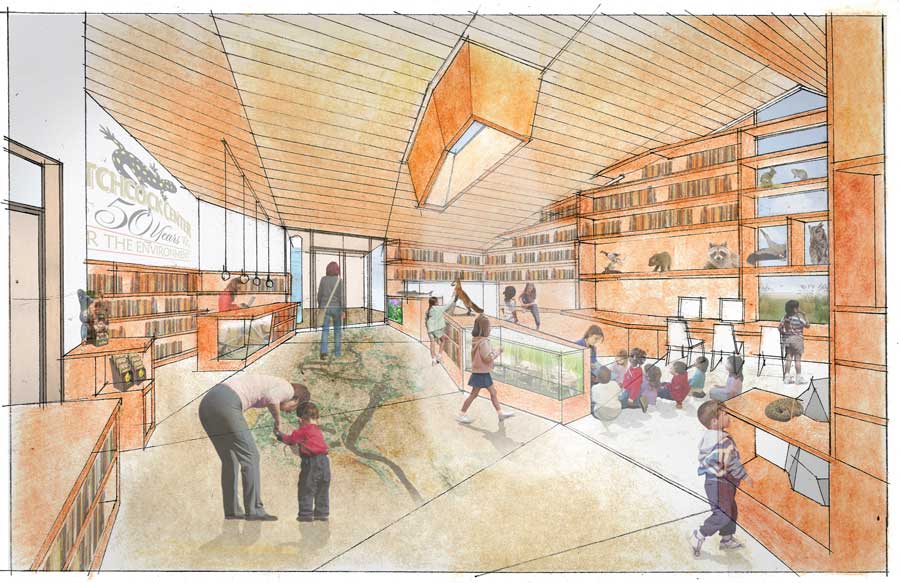 Our visitor center will include engaging live and interpretive exhibits highlighting New England habitats and the ecological cycles and systems that sustain all life.

An example of how a standard is used for teaching resulted from the LBC requirement for net-zero water use. The architecture makes the building its own watershed. Children who are present when rain begins to fall can see how the first flush of rainwater from the roof goes into acrylic tubes, where the dust, pollen, and tiny debris coming off the roof are trapped. By the time those tubes fill, the water is cleaner, and it then goes to storage tanks. It is filtered and purified naturally, before it is used in the building. After water is used, the gray water is passed into wetland areas of the environment around the building, instead of going to a waste treatment plant. The center uses composting toilets to complement the system.

There is a graphic display of the Connecticut River watershed rendered on the floor of the main room, so children can see how the building mimics nature. The operation of the building’s net zero water system can be easily compared to the natural watershed of the river.

One unusual story of the new Hitchcock Center has to do with its history. In days gone by, the land was an orchard. As such, it was subjected to decades of insecticide use. In fact, it was still possible to detect the traces of lead arsenate in the soil. While the amount was below the legally allowed limit for human exposure, the center’s leadership wanted to go past what was simply required and make the grounds absolutely safe for the children who would use them.

Since lead arsinate cannot be removed from the soil by any practical means, the soil was removed and used to fill below the parking lot. New soil, which was tested and found free of contaminants, was spread across the site.

Mark Ledwell is the project manager for Wright Builders. With his knowledge of building and LBC, he was able to provide a long list of details about the building’s insulation, windows, heat, lighting, lack of thermal bridges, photovoltaics, and more. But he also reiterated an insight about the building’s design. “The intention,” he said, “is to showcase the environment.” In this case, the environment includes the entire Connecticut River watershed and beyond.