Valley parents head to the outdoors on toddler time 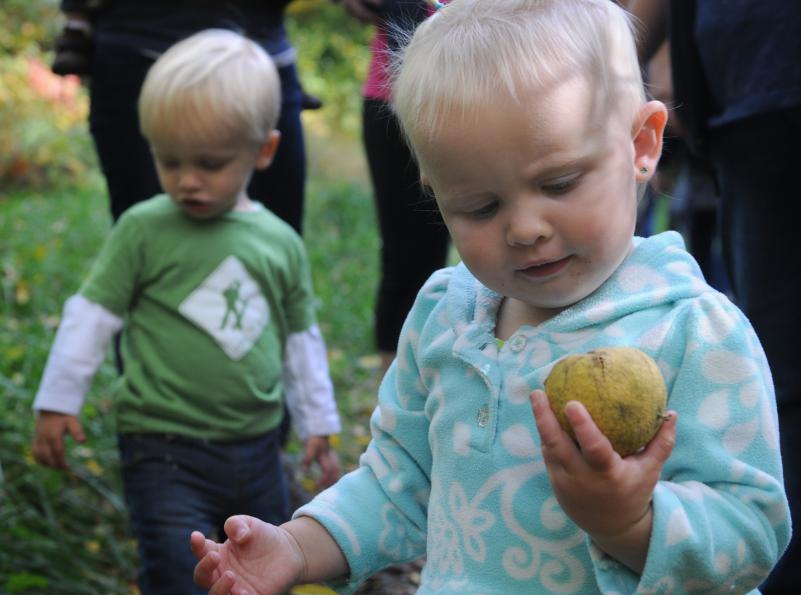 Hike leader Oliver Sheppard-Witkowski, 14 months old, points with a noble air toward the stand of red and gold trees on the other side of the road at the Hitchcock Center for the Environment in Amherst. He steadies himself with one hand on a wire fence. His brow is creased. He looks like a Shakespearean actor preparing to intone great words.

In the distance behind Oliver, Rhubarb the goat looks on. With ears and horns sticking straight out, his curiosity looks like indignation.

Oliver’s, alas, is a silent speech. He carries on pointing, but he’s soon overcome with a need to check out some nearby gravel.

He’s surrounded by mothers, each with a toddler, and nobody minds stopping while Oliver and his compatriots grab handfuls of gravel with gusto. This really is a kid-led adventure. It’s called Toddle and Waddle It, Baby, and it’s an easy one-mile loop, no more than an hour even at a very slow pace.

Others of similar distance happen almost every day in the Valley, from Great Barrington to the Quabbin. In-town strolls take place too, at Childs Park in Northampton and the Belchertown common, plus the short weekly hike at the Hitchcock Center. All are readily found at HikeItBaby.com.

As Oliver’s mother and hike organizer Kerri Sheppard of Belchertown says, the group’s mantra is “No one gets left behind.” Instead, mothers — there aren’t any fathers on this hike, though fathers are part of Hike It Baby, too — linger with impressive patience, waiting for the seven kids from just under 1 to 2-years-old to collect leaves, stare at a tree or examine a chestnut. The seven mothers stroll along, talking weather or comparing notes on baby carriers, vital equipment for Hike It Baby events.

Audrianna Giroux-Withers of Belchertown, 22, says carriers have become something of an obsession of hers, and she demonstrates her “PFAs,” or perfect fit accessories, which tighten her carrier, snugging it up to her shoulders and raising Quinn LaVallee, an eager 17 months-old, up for a better over-the-shoulder view.

Earlier, at the group’s pre-hike huddle and greeting session, Sheppard, 41, asks for a volunteer to be the group’s “caboose.”

The caboose is there to field any wayward stragglers, but also to stay and lend a hand to a parent in case, Sheppard says, “There’s a meltdown to deal with, or somebody needs to nurse, or somebody just needs to look at a rock for 30 minutes.”

It’s a beautiful day, the kind of day that New England does best, full of falling leaves, distant gold-flecked hills and a dramatic, changing sky. As the group ventures into it, a rhythm soon develops. It’s a rhythm of walking, then slowing down when one of the kids finds something that warrants further examination, then a regrouping as the mothers gently encourage the tots toward the next stop along the route.

Early on, the kids see a snake slithering down between the boards on the raised walkway. Then it’s frogs in a stagnant, if verdant, pond. One of the toddlers makes a break for the pond, which requires navigating a tricky step off the raised wooden path. Everyone’s relaxed, but a mother quickly scoops up the off-piste explorer. She moves so fast it’s hard to catch which one it was, and that’s not unusual — parenting is something of a collective activity with Hike It Baby.

Giroux-Withers says she joined the group after she saw it on Facebook. She’d been a fan of the outdoors before Quinn arrived, but hadn’t quite found a way to take her baby regularly on hikes. Most organized groups, she says, weren’t interested in slowing down to meet a young child’s needs.

Apparently, plenty of other parents felt the same need: Sheppard says, “We had our first hike on the first day of spring this year. In two or three months, it just exploded.”

Sheppard stumbled upon Hike It Baby, via a blog she followed, Tales of a Mountain Mama. A commenter was looking for family hiking, and another mentioned Hike It Baby, a nationwide group. Sheppard figured a place as outdoorsy as the Valley would have a branch, but she found that the nearest one was in Boston. That inspired her to begin one here.

A look at the Valley Hike It Baby calendar on the national website reveals just how much it’s exploded — the list of recurring area hikes goes on and on, with one or sometimes several nearly every day. Valley mothers and fathers have flocked to the group, which currently boasts 795 members on its Facebook page. Anyone who comes on a hike can become a leader on new trips, so the idea can spread quickly.

Giroux-Withers, a she’s a stay-at-home mom, now goes on several hikes in any given week, all within an easy drive of her home. She says the treks have cemented Quinn’s love of the outdoors. “When she gets up, she goes to the front door and says, ‘Out?’ ” says Giroux-Withers “She doesn’t want to play inside at all.” Quinn also puts in regular requests to see her Hike It Baby friend Nash, the 2-year-old son of Northampton’s Amy Thompson.

Quinn, running free, soon demonstrates her friendliness. She finds a particularly compelling rock and makes the rounds, showing everyone. She looks serious beneath the tiny pigtails that stick straight up from her head. Another couple of kids check out the rock with equal seriousness.

The easy sociability that forms among children and parents is a major part of Hike It Baby’s appeal. “The core tenet,” says Sheppard, “is to get out and create community.”

Hike It Baby’s story is one of remarkable growth, and it’s a story made all the more remarkable by the organization’s age, which is about the same as the toddlers’.

Founder Shanti Hodges was part of a new mothers group in Portland, Oregon in July of 2013. She asked the other mothers if they’d like to join her on a hike. The first time around, five mothers showed up. The number increased on each subsequent hike, until Hodges found herself sending out a newsletter to 100-plus participants.

Before long, people outside of Portland heard about it. That led Hodges to create a structure that is, in a sense, franchisable. New branches of the organization can be founded by just about anyone with a one-time administrative fee of $35 and a 30-day training period conducted online and via interaction with other branch leaders.

Hikes are free, though the group encourages participants to sign an online waiver of liability. Hike It Baby’s website says that within its first year, the organization had 1,000 members in Portland, and branches in several states. Now, just past two years on, the approximate number of U.S. families involved is 20,000, with branches in every state, plus Australia, Canada, the U.K. and Italy. Every week, there are 200 to 500 Hike it Baby outings.

Sheppard says she believes the idea has caught on so well in part because it’s a counter force to technology. “We’re having our kids explore life in nature — screen-free and tech-free.”

Hike It Baby Pioneer Valley is a particularly busy group, and there’s no plan to slow down, says Sheppard, even in the snowy months.

At the Hitchcock Center, an intriguing dynamic unfolds. Not long after Oliver’s Shakespearean turn, a couple of children meet mid-trail and shake hands like they’ve closed a deal. One then places a hand gently atop the other’s head.

The next transaction is a little less focused — a couple of kids plop down. They don’t seem interested in moving on, and they look a bit woozy. The adults are caught up in conversation, and another child or two sends out a little wail. Soon there’s outright crying, and every kid gets in a wail or two. It’s a meltdown that seems coordinated, as if nearly all the kids hit the point of overwhelm simultaneously.

No one panics. The mothers keep talking, but they go into action, too, unbuckling empty carriers and hoisting crying kids in for the final leg of the hike. Distraction soon wins the day, and most of the kids go quiet.

Samantha Doubleday, 27, from Pelham, says having a toddler experience a mid-hike meltdown is not a big deal with the group. “On a Hike It Baby hike, someone’s always going to hang with you. On a regular hike, people aren’t going to stop for nursing or an explosive diaper issue.”

The mothers follow the kids’ lead, she says. “Everybody gets interested in something and slows down. Then one kid quits, and goes on to something new.”

The mothers encourage the little ones to push on to the next attraction. After the group meltdown, the goal becomes finding the tractor that recently drove past the goat field. Most of the Hitchcock Center trail is wooded, but then the trail joins a gravel road leading past the field and toward a working farmhouse, whose owners don’t mind hikers passing through.

The kids get distracted by a drain, which they quickly determine is a great place to deposit rocks. After a rock-drop or two, they spot the parked tractor in a weathered wooden garage. The Hitchcock parking lot is in view, and the hike ends with moms and kids heading for cars or bathrooms.

Soon, several mothers break out blankets for a picnic.

It may not be mountain climbing or Appalachian Trail voyaging, but the Hike It Baby event accomplishes something subtle, if important. Kids and parents alike are calm, happy. It’s a world away from screens and technology, and it’s a counter force to the isolation that new parents, particularly stay-at-home moms, often experience.

Doubleday says she and her daughter, 11-month-old Finley, spent a lot of time indoors in her earliest months. Hike It Baby gave Doubleday a way to get outdoors and into the company of other parents.

After that isolation, she says, “Going out — and not doing it alone — is a big deal.”